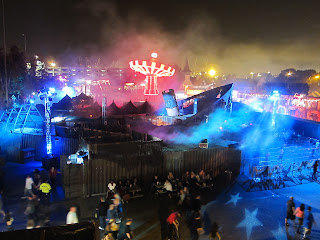 Tuesday
I stayed on the Queen Mary and took some of the ghost tours to learn about the "real" paranormal sightings aboard the ship. They also have a tour that is more of a theatrical haunted house style with some better-than-expected production value.
Wednesday
I headed to Tustin, CA to check out the 17th Door. A bit more disturbing than frightening, but a very enjoyable and creative haunted house.
Thursday
I checked out Knotts Scary Farms with some folks I met at the West Coast Haunters Convention. Some fun haunts, but the later we were there, the longer the lines. Really enjoyed the atmosphere there. They made the whole park very dark, and if you looked hard enough, you could buy an overpriced glass of beer.
Friday
Universal Studios Horror Nights. I tried to get there earlier, but the 20 min drive took over 2h with a traffic accident. Some short lines to begin, then they got unreasonable. The haunts were less amazing than I expected, but Universal does a good job of creative places to scare from.
Saturday
I headed back to the Queen Mary to check out Dark Harbor (pictured above). Super enjoyed the whole experience. Glad I had the VIP tickets. The haunts, while technically not as impressive, had way more heart than others I've been to, and I didn't feel as crowded with conga-line approaches. One of the guides actually let me go into a haunt alone (until I caught up to another group).
Posted by Ben Krakowsky at 6:13 PM No comments: