Here's a list of Haunted Houses open for 2013
Potter's House of Horrors (Surrey) A Great haunt year after year. Get there early enough or buy the VIP tickets and hit the Bear Creek Scream Train too which is just a short drive away. Open 6-10 nightly through Halloween.
Bear Creek Scream Train (Surrey) We always get some great laughs and hear many screams from this train. Actors can and will touch you. Open October 18 from 6:30pm to 10:00pm through Halloween.
Fright Nights at Playland (Vancouver) I went last year, and while there were some good haunts, it's so overcrowded that one's experience is limited. My first experience was with obnoxious security guards that go through all your belongings with as much tact as the TSA and poked a dirty ungloved finger into the container I keep some pills in. It might be worth it if you go on a rainy weekday, but I've found that they oversell the attraction and too many people in the haunts, and long lines wreck the fun. We arrived an hour after opening on a weekday and just barely had time to get through all the haunts without stopping to watch a show, go on a ride or eat. This year they're selling a fast pass for $60/$70. Still the most Halloween per square meter that you'll find. Open Weds-Sunday through Nov. 2nd.
Dunbar Haunted House (Vancouver) Always a wonderfully decorated haunt with some clever scares. Their third year at a new location and an intriguing theme. One of the fullest and best themed and decorated haunts around and each year they up the scare factor too. Proceeds to charity. Open daily through Halloween.
Reapers (Chilliwack) A great haunt that embraces darkness really well. Great scares and worth the drive. They also have a haunted maze, which had an actor who was able to startle a seasoned vet like me. They're open nightly from Oct 18 through Halloween.
Island Haunt (Nanaimo) If you're on the Island, check it out and let me know! Oct 18th-19th, 25th-31st

Stanley Park Ghost Train (Vancouver) a kid-friendly journey through the monsters of film. Open nightly through Nov 2nd.
Ghost Ridge (Maple Ridge) While thier site is not updated from last year, their facbook page says they're open from Oct 23-30.

Delta Haunted House (You Guessed it, Delta).  I dont' know too much about this haunt, but the photo looks good.

New This Year
Judge Dee's Chinatown Haunted House at Sun Yat-Sen Gardens (Vancouver). Not suitable for children. transform the Classical Chinese Garden into a terrifying Haunted House. Featuring over a dozen actors, dancers and musicians, this one-of-a-kind experience is inspired by the gruesome stories of Judge Dee: China’s Sherlock Holmes. Open Oct 24-31st
Monstars and Beasts (North Vancouver) Says it's a haunted house, but seems more like an art installation Worth checking out I'm sure though. Oct 26-31st.
The Oubliettes of Dreams (Vancouver). If it's anything like the House of Fairy bad things that this group put on a couple years ago, expect an amalgamation of haunted house and performance art. Dare to enter the twisted and dangerous inner world of a circus madman. Oct 19th and 26th.

Not Open this year is Surrey's Barnyard Phantoms which was unable to open because of some newly developed structural concerns.
Posted by Ben Krakowsky at 2:27 AM 1 comment:

Trick or Treat: The Halloween Party

Our first attempt at throwing a Halloween Party was a great success. We all had a great time and raised money for Children's Hostpital.   Our Facebook page and website are here for your viewing pleasure. Check out more photos on the Facebook page.  Hopefully we'll be able to do this again. 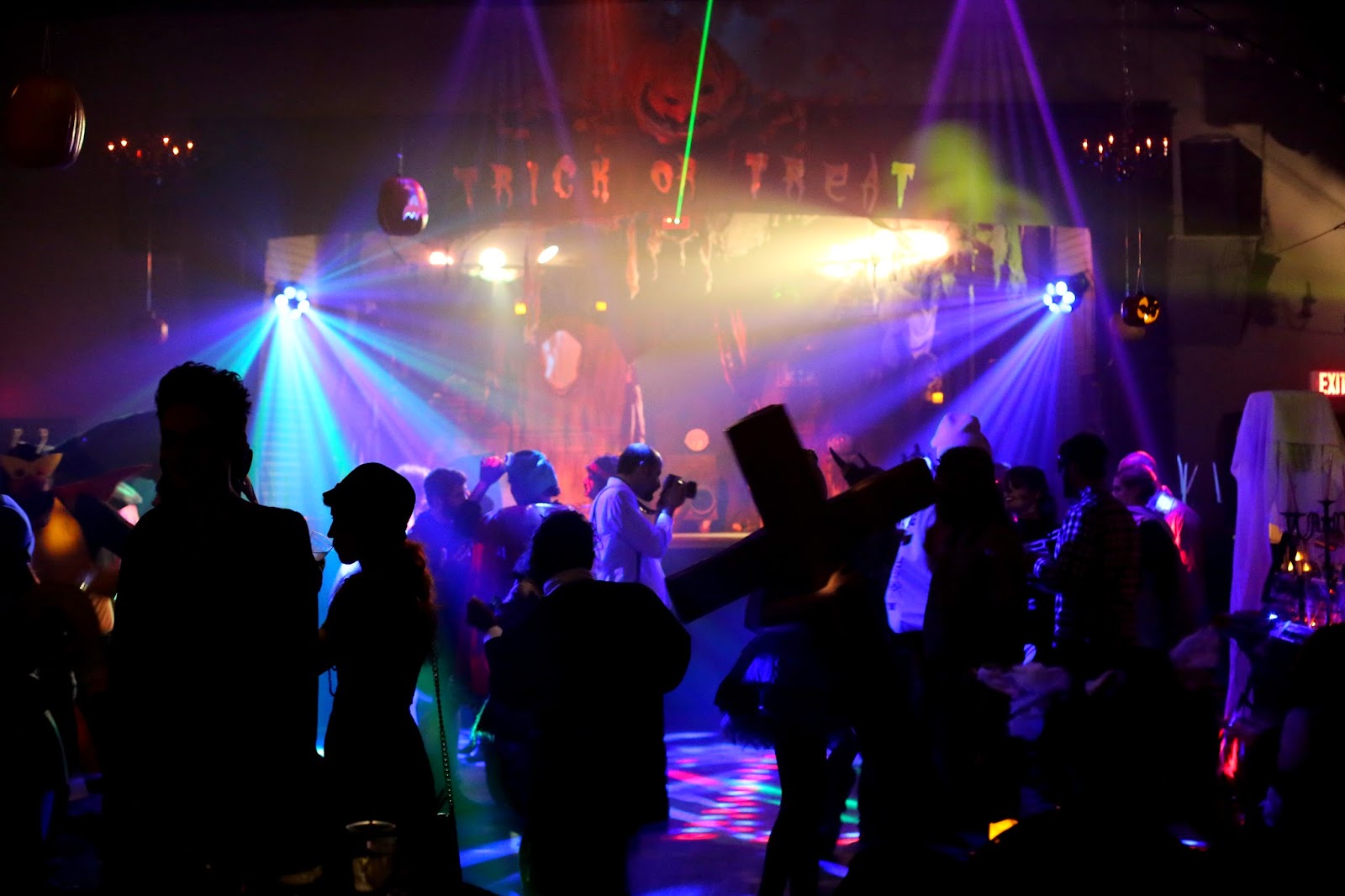 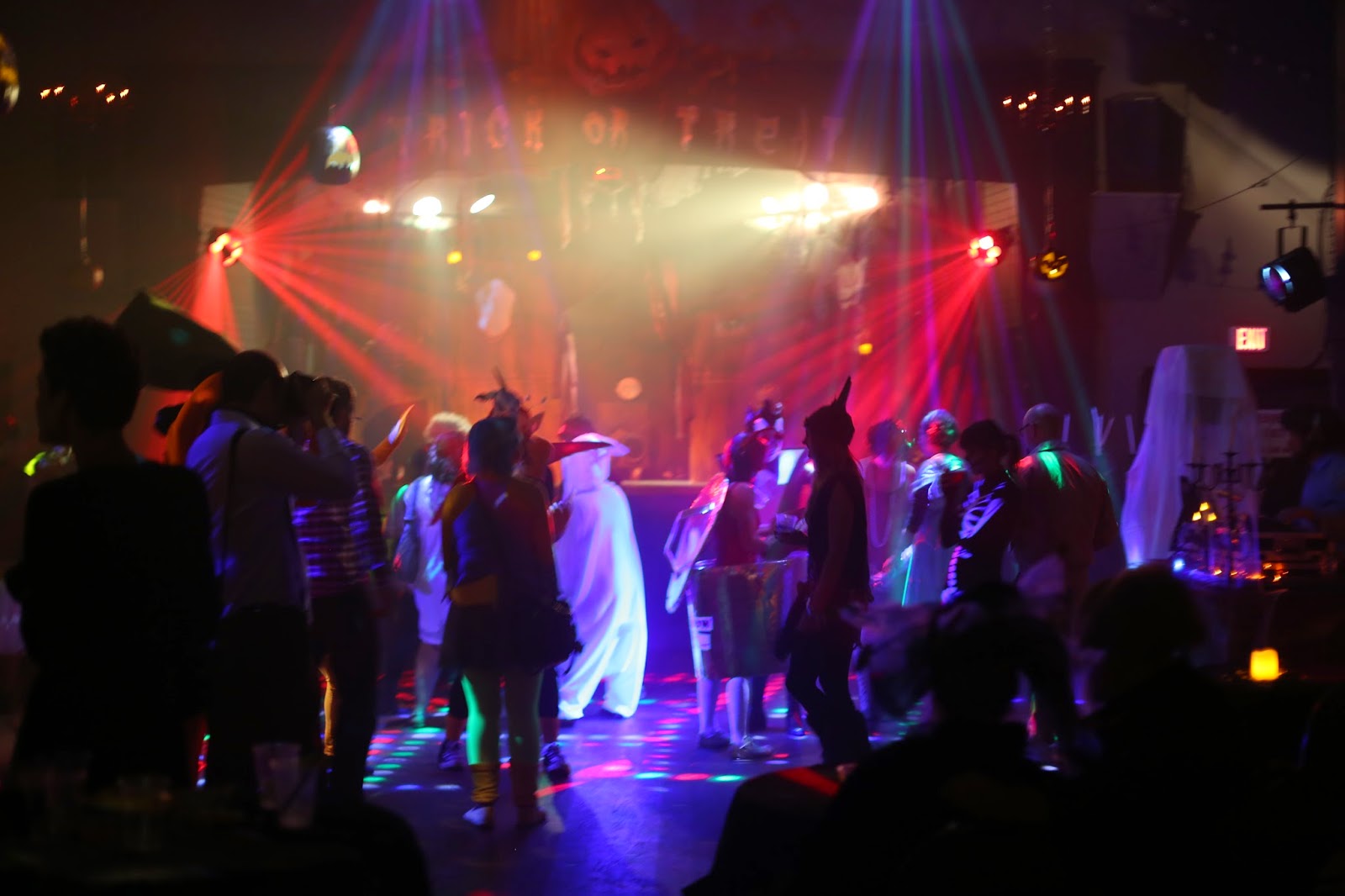 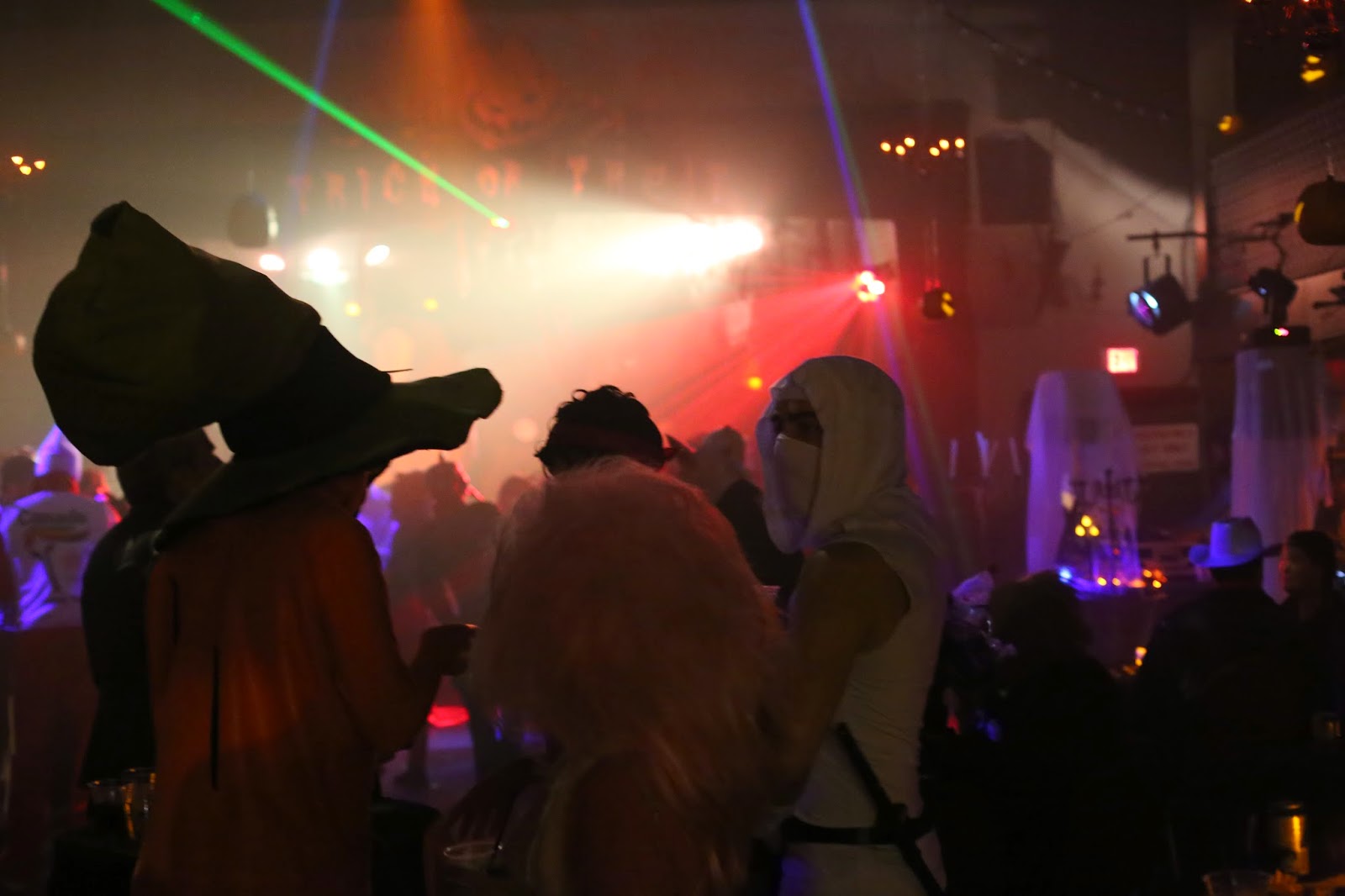 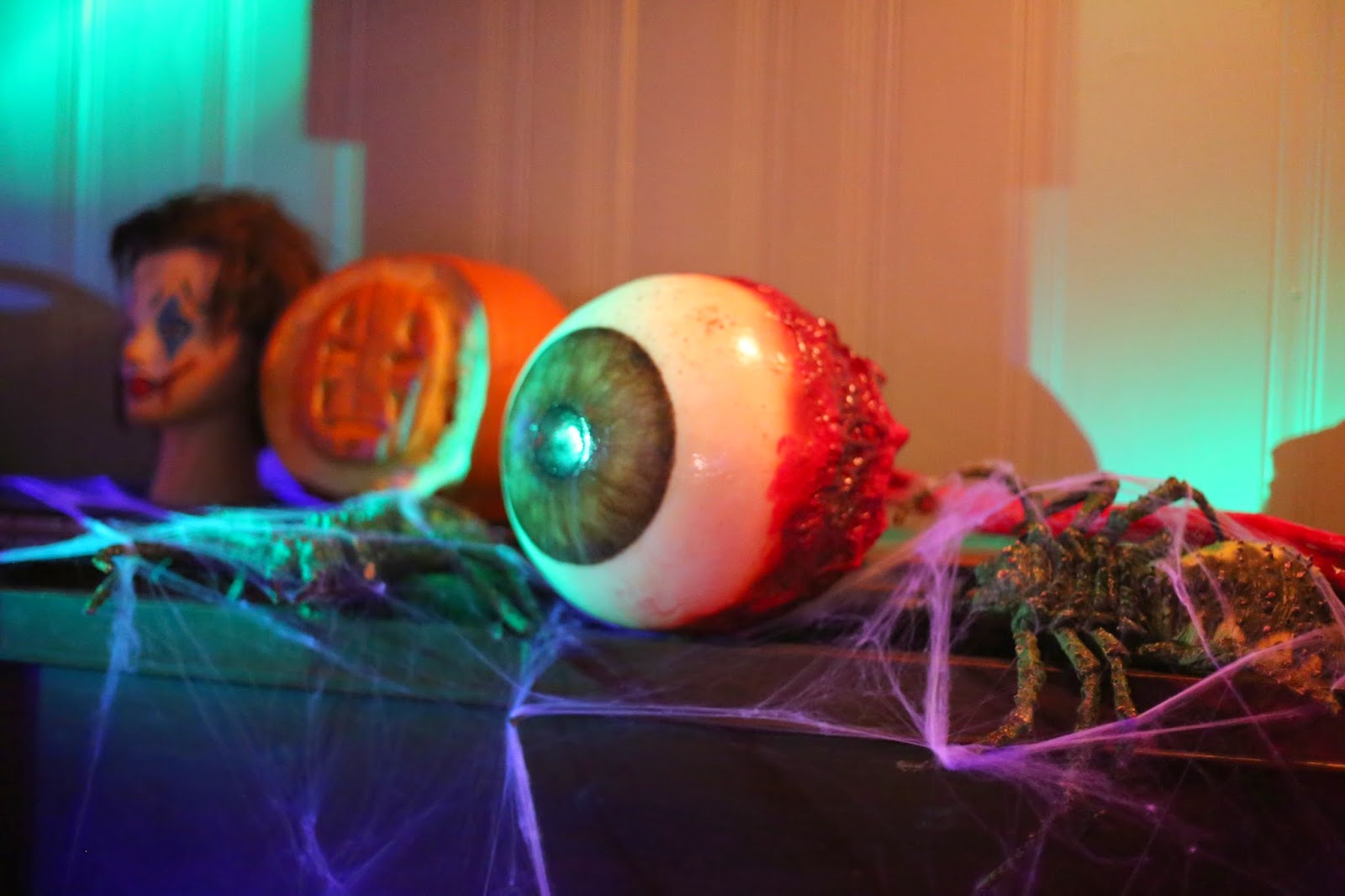 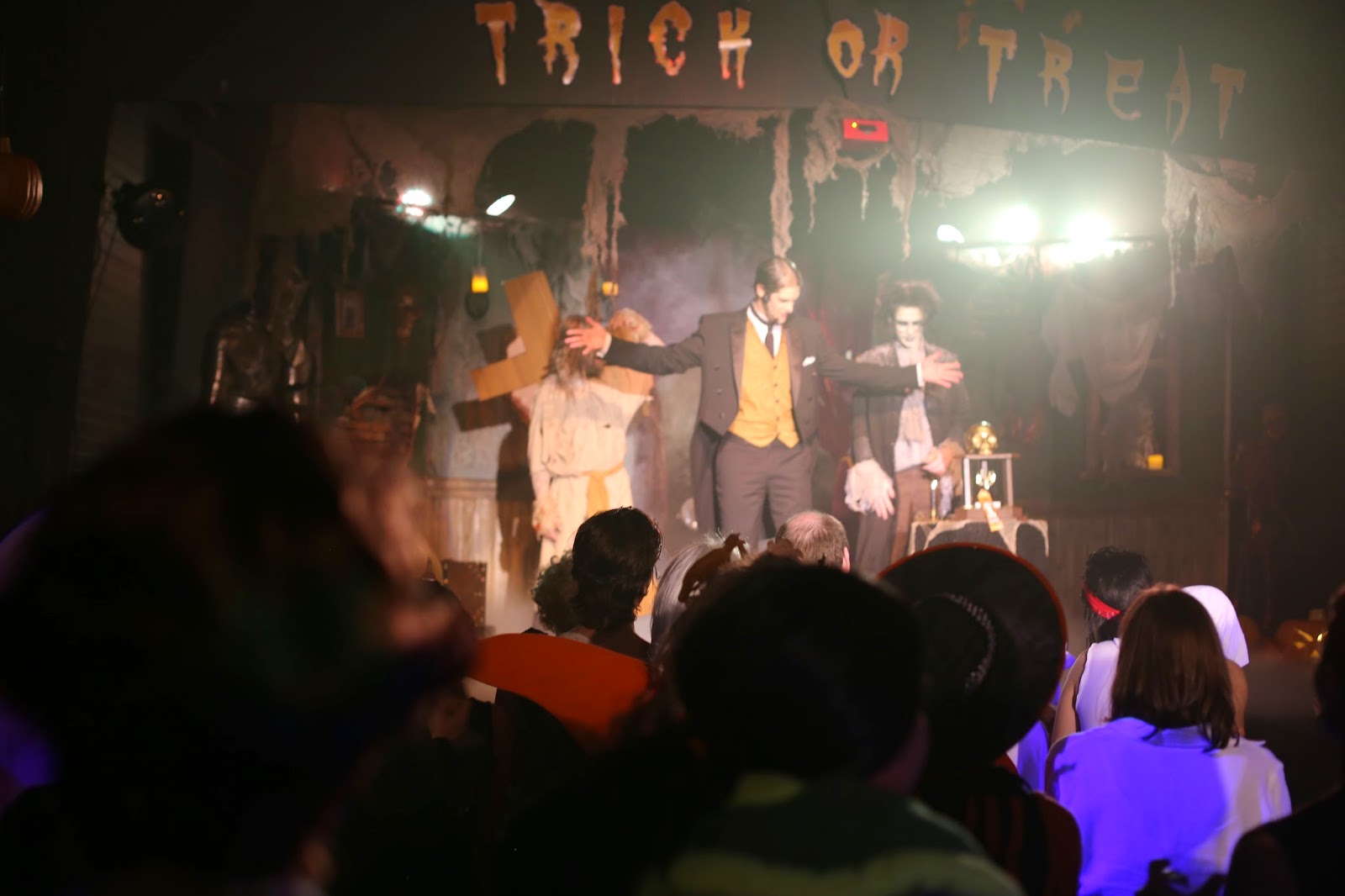 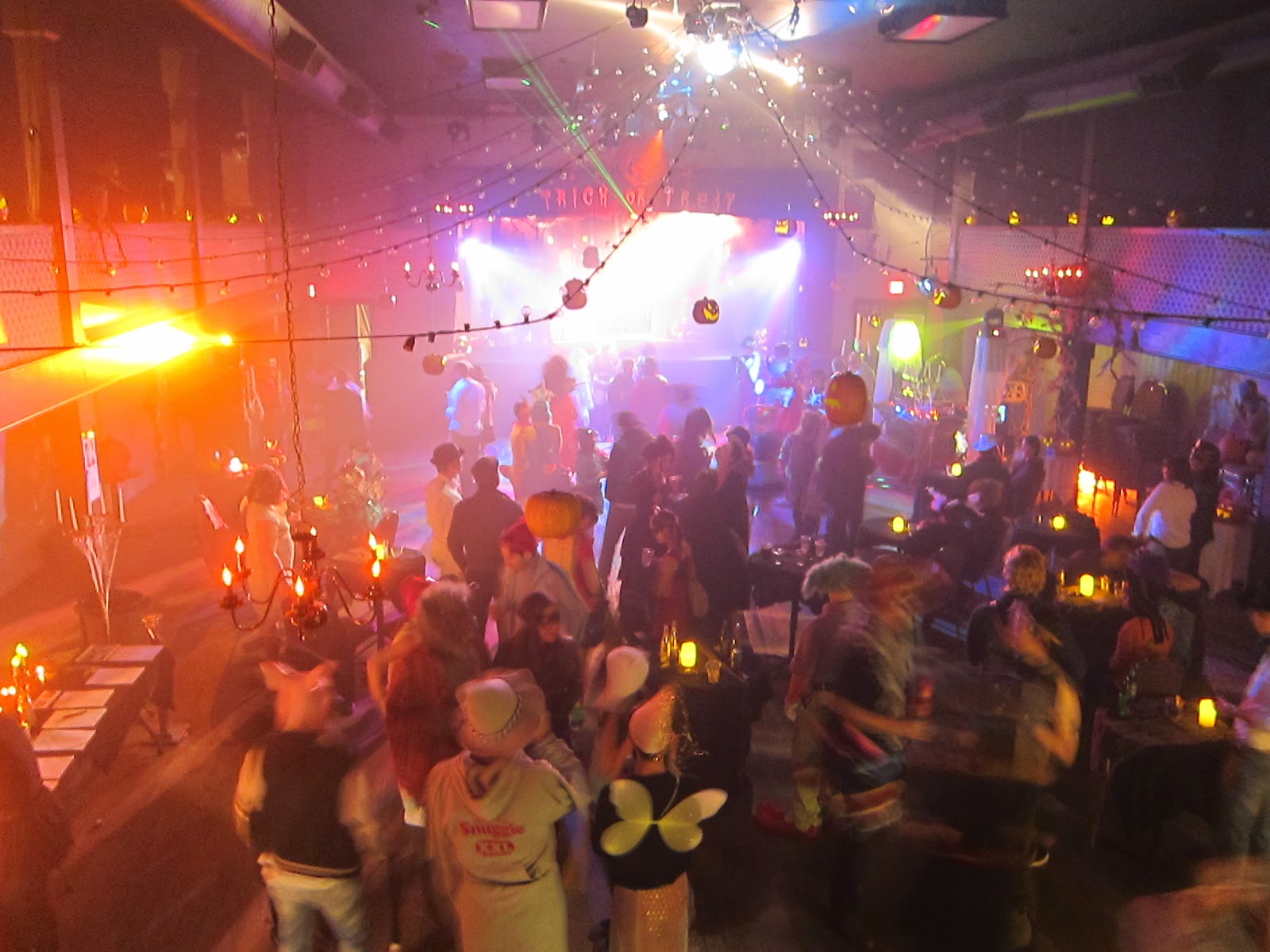 Posted by Ben Krakowsky at 9:52 PM No comments:

A trip to Portland for the West Coast Haunters Convention.  I put together my idea for a Canadian stereotype: the zombie lumberjack. Originally I was planning on wielding the chainsaw,  but thought it would be more fun if it were through me. Due to time and physics restraints I had to settle for not having the chainsaw running (I tried). Also pictured from our excursion to Voodoo Donuts is Angie (Dead Spider):  the costume contest winning zombie waitress,  Grant: the zombie Mountie,  and Sean: Alistair Craine. 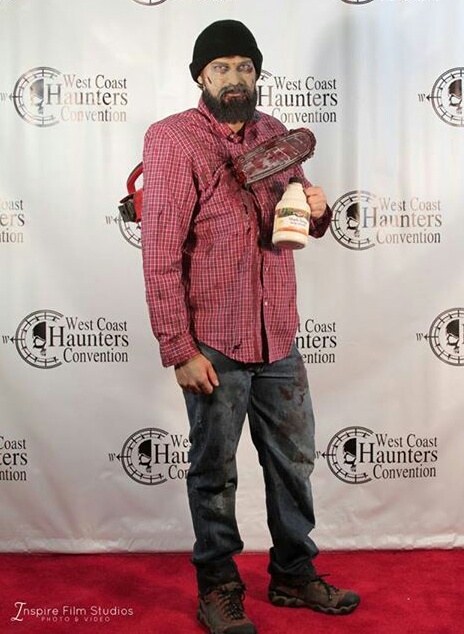 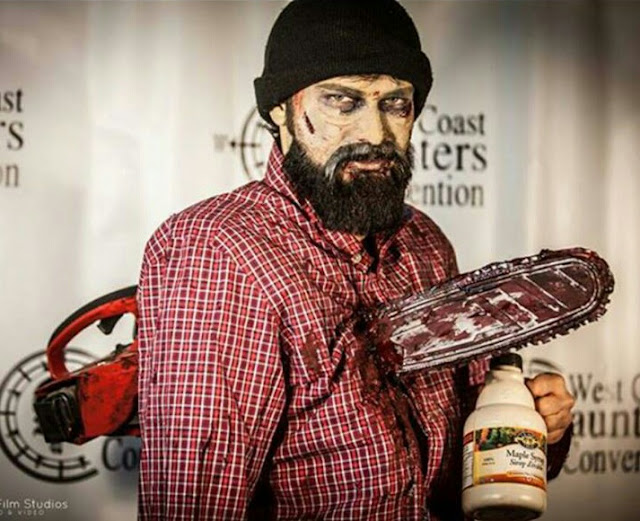 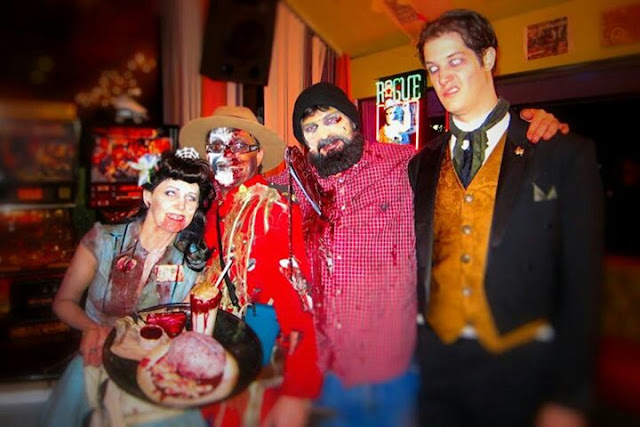 Posted by Ben Krakowsky at 4:34 AM No comments:

I got  hired to put on a haunted house at the Arbutus Club.  It was to be zombie themed and contained in 3 inflatable rooms. I decided to turn it into an overrun army mobile lab.  We didn't have a lot of time or money to work with,  but what we might have lacked in decoration,  I think we made up for in scares. Apologies for the flash photos. 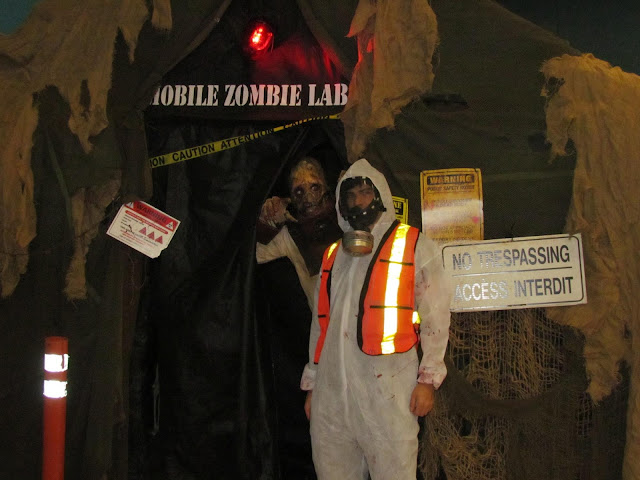 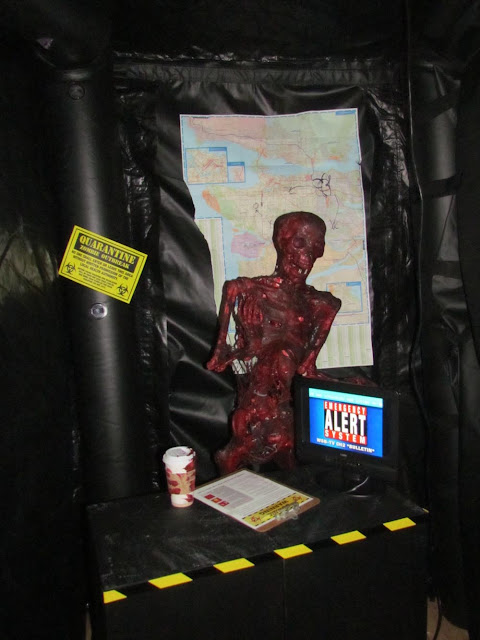 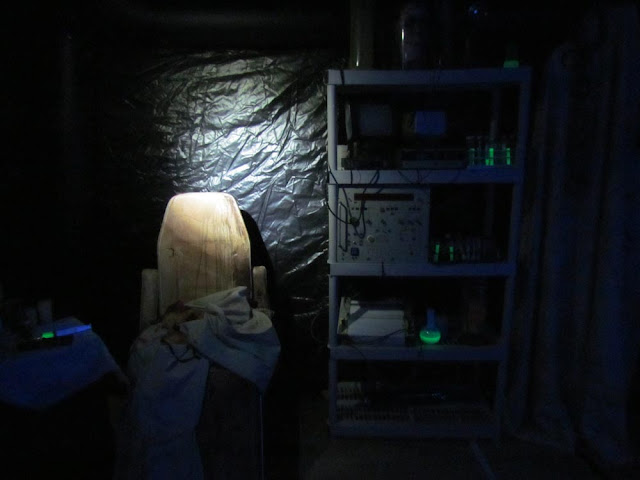 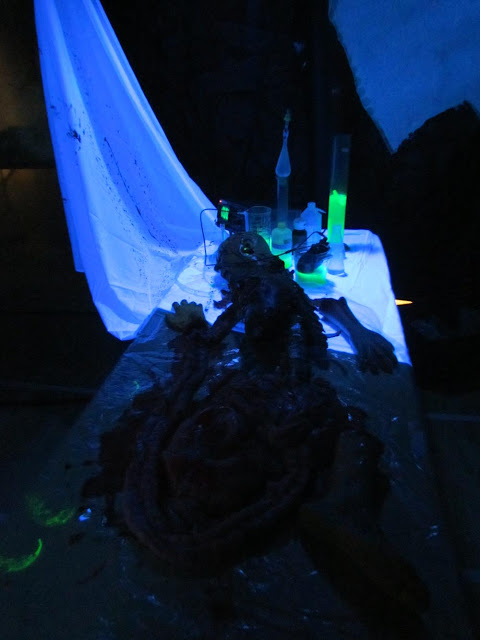 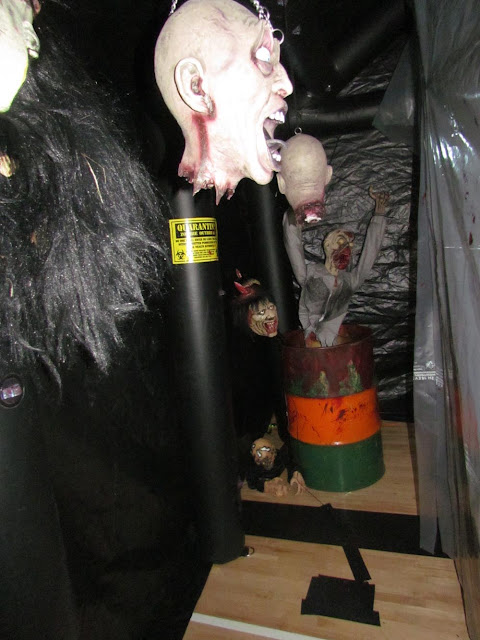 Posted by Ben Krakowsky at 4:24 AM No comments:

Our set for 2012 was going to be a crypt.  When we found out that the rest of the haunt had a bit of a backwoods hillbilly theme we added an element. This was no ordinary crypt,  this was a crypt being used to cure sausages. And these were no ordinary sausages... 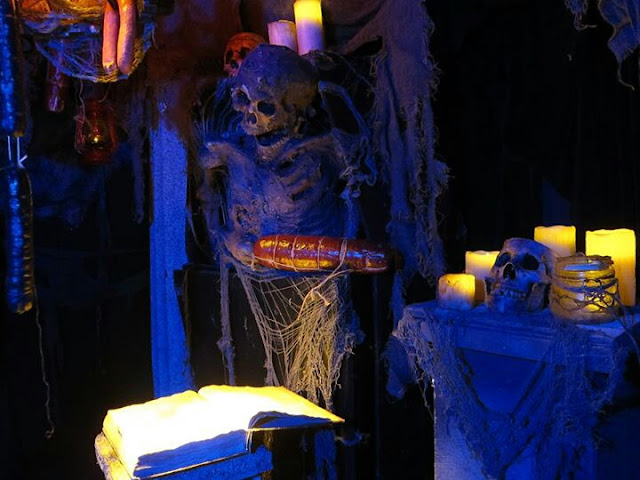 Posted by Ben Krakowsky at 4:11 AM No comments:

Sean and I once again decorated the stage for Abracadaver.  I even managed to make it on stage only to be electrocuted and then melted with acid. 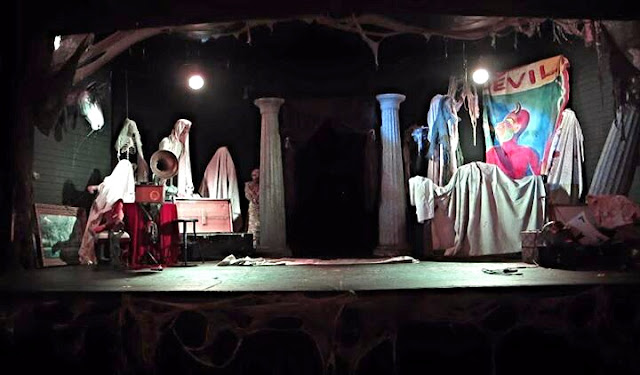 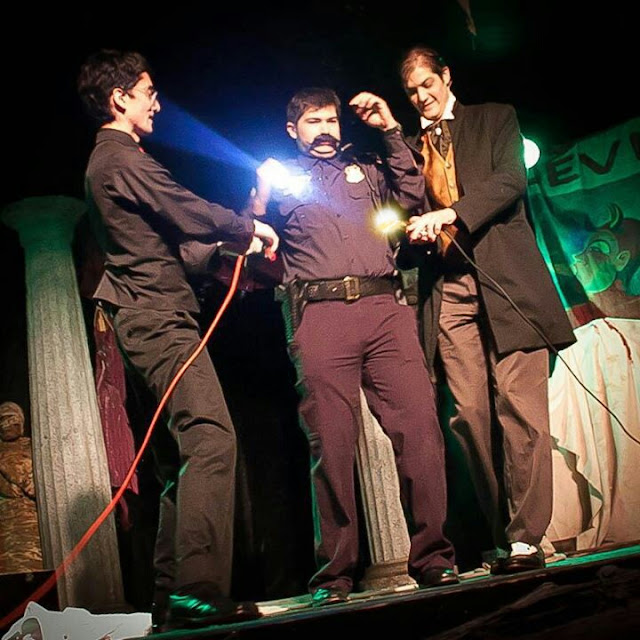 Posted by Ben Krakowsky at 4:04 AM No comments:

Halloween 2012 at The Waldorf

Halloween night,  a Wednesday if I recal. Checked out the Waldorf for the first and possibly last time.  The only part I liked was the $14 drinks served in coconuts.  My costume for the evening was an escaped mental patient. Anyone who takes issue with a negative portrayal of mental health issues may pull the stick from their rectum: it's Halloween!  Anyway,  straight jacket with one arm free,  sweatpants and slippers. We had to leave the Waldorf though when they refused to play The Monster Mash,  believing incorrectly that the French version was way better. 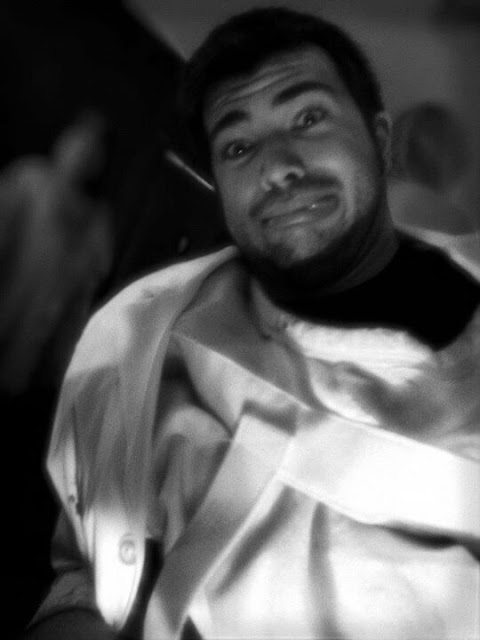 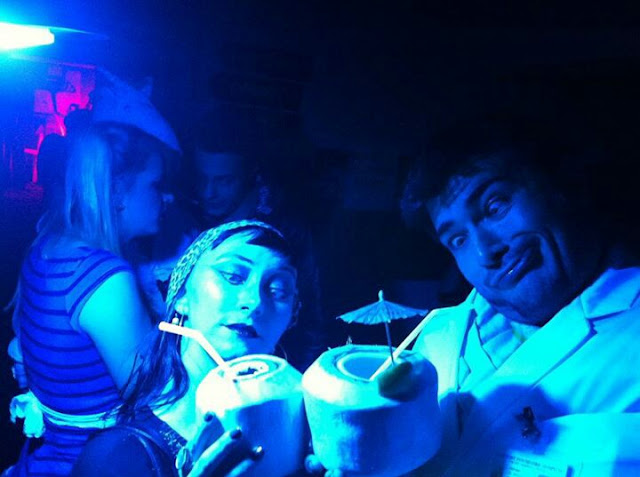 Posted by Ben Krakowsky at 3:52 AM No comments:

This year I didn't have the time I had last year to work on a costume so I needed something quick.  I've had the idea for a smoldering fireman for a while (just never been sure if it's in bad taste or not). This year we were going to the party at SinCity so I figured the fireman costume would work within their loose fetish theme,  and be comfortable to wear.  My twist was that I was going to be smoking. With a rented $1600 battery powered fog machine strapped to my waist,  and another smaller one run up through my helmet,  I was good to go... Until they both stopped working before I even got into the club.  Alas.  Didn't get any good photos either. 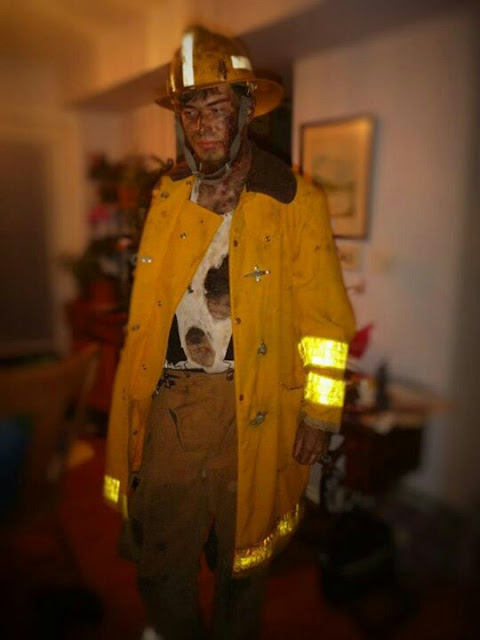 Posted by Ben Krakowsky at 3:41 AM No comments: