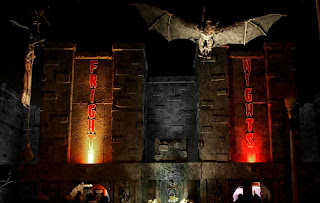 Let me start off with the positives:

-This event has improved quite a bit since the last time I was here. It's under new ownership, and they're putting a lot more money into it.
-There are quite a lot of cool props from Scarefactory, one of my favourite prop suppliers
-There was a neat tunnel/hallway of inflated walls that one has to squeeze through that was pretty neat.
-The Darkness haunt had some pretty awesome walls .

I've run out of good things to say.

The biggest problem that we encountered was that they've oversold thier capabilities. I knew that the Saturday before Halloween, with nice weather, would be a busy night, but there is such a thing as too busy. Waiting in long lines is annoying, but tolerable for a good event, but when you spend most of your night in lines after paying $30 to get in, it can be pretty frustrating, especialy when the payoff is weak. To help speed the lines, they were letting people through with almost no space between groups. This meant that sometimes you could see the group ahead of you getting scared, so the surprise factor was gone. It also meant that the timing system for the motion sensors was rendered useless. Props wouldn't go off at the right times, or even at all because the motion sensors, constantly being triggered by the stream of people, props were timed by their reset cycle rather than with any scare timing. The atmosphere of isolation is also totally blown when it's more of an indoor lineup than a small group exploring a creepy haunt. It's okay to say the night's 'Sold Out'. It's good for business to have an event sell out.

Many actors were unenthusiastic and just didn't know how to scare, or where to scare from. There were many perfect scare spots that had no one in them, and spots with actors that just didn't make sense. Don't put an actor in the middle of a hallway, put him around a corner!

The "Carn-Evil" Clown maze was an abomination. It consists of a maze of mod-u-loc fencing and tarps with very few scenes. There lack of anything in the maze was painful. If they condensed it all down to about half the length it kept the fog level high, or added some pitch-black portions, it might have made us less angry.

Have some entertainment for the lineups! Have some charachters come up and interact with you, sneak up behind you, or put on a scene. Fright Nights is the only haunt I've been to this year that's not had that! I probably saw four people doing 'walkabouts,' but for such a large place, it wasn't enough, and the people I saw were not very good or enthusiastic. I know it's cliche, but I didn't even see one chainsaw!

On a less busy night, I know I would have enjoyed my experience a little more, but it's still really frustrating to see some wonderful props and some interesting sets be squandered.  20% fewer people, and better training for actors and staff would have gone a really long way.
Posted by Ben Krakowsky at 2:42 AM 1 comment:

This is a list of some of the main haunts in the Lower Mainland. This is not a complete list of every Halloween event, or small haunted house. Do to my association with many of the creators of these haunts, I will not be ranking these haunts in any way. They all have thier own unique qualities that make them good, and you will get something different out of each one of them. These haunts are now all open nightly until Halloween.

I've not been to these ones, so I can't verify what they offer:
Ghost Ridge -Maple Ridge  ( I think this is new for '09)
Haunted Power House -Stave Falls (I'm intrigued by the claim of a 45 minute tour)

If anyone has any other suggestions for Haunts that should be listed, let me know. Also, I'm curious if Aberthau is able to live up to being listed again, please email me if you go this year, and let me know what they've done.
Posted by Ben Krakowsky at 1:16 AM No comments: